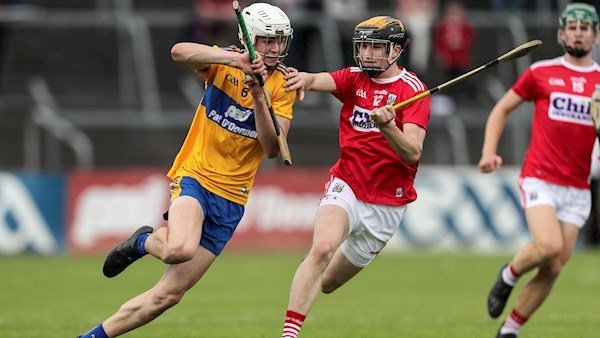 Published: over 1 year ago

Cormac Murphy scored a late winner to ensure Clare qualified for the Munster minor hurling final for the first time since 2017.

Despite holding a six point lead, Clare were made sweat till the final seconds to secure their place in the provincial final holding off a second half fightback from Cork which included two goals in the space of a minute from Ballygiblin’s Darragh Flynn.

Clare manager, Fergal Lynch is eagerly awaiting the chance to renew rivalry with Limerick. “The Munster final we’ve been talking about it since last November, this group of players won very little at 14s, 15s and 16s, not much thought of them, a lot of work put in by other managers. We’ve a special group here and they’re going to have a conveyor belt for our seniors in a couple of years time hopefully”.

A very strong second quarter from Clare saw them carve out a six point advantage at the sounding of the half-time whistle, outscoring the Rebels eight points to three in this period. Little would separate the sides early on with Cork holding the lead up until the thirteenth minute.

John Considine’s Cork needed to come out swinging in the second half and they did. Within fifteen minutes of the restart, they were on level terms with Flynn firing home two bullets to the Clare net, one off the back of a Jack Cahalane handpass, the other largely of his own making as he tore through the Banner defence.

Cahalane appeared to have pushed the Rebels into the final with a pointed 65 on fifty five minutes but the hosts had other ideas. A superb piece of skill from Sean Ronan saw the substitute hold off four Cork players and scoring from an acute angle to level matters.

A missed ’65 from Cian Galvin would not prove to be the fatal for Clare as O’Callaghans Mills’ Cormac Murphy stepped up to see the Banner defeat Cork in the minor championship for the first time since 2012.

Twelve wides including four placed balls would prove costly for a Cork side that had strong performances from Ethan Twomey, Ciaran O’Brien and Jack Cahalane.

Although they were guilty of allowing their opponents back into the game, Clare live to tell the tale. Oisin O’Donnell, Diarmaid Cahill, Conner Hegarty and Jarlath Collins were best for the victors.

Get live information for Club on the ClubZap App